Shiga toxins - Stowaways on your sprouts

Shiga toxin (Stx) is one of the most potent bacterial toxins known causing diarrhea and kidney failure, especially in children (Melton-Celsa 2014). Shiga toxins belong to the AB5 family of protein toxins (Basu & Tumer 2015). The toxins consist of two major subunits, an A subunit that joins noncovalently to a pentamer of five identical B subunits. The A subunit of the toxin injures the eukaryotic ribosome, and halts protein synthesis in target cells. The function of the B pentamer is to bind to the cellular receptors, found primarily on endothelial cells (Melton-Celsa 2014).

Since Shiga toxins require highly specific receptors on the cells' surface to attach and enter the cell; species such as cattle, swine, and deer, which do not carry these receptors may harbor toxigenic bacteria without symptoms, shedding them in their feces, from where they may be spread to humans (Asakura et al. 2001).

Shiga toxins Stx1 and Stx2 exhibit differences in cytotoxicity to various cell types. In humans infected with Stx-producing E. coli, the most serious manifestation of the disease, the hemolytic uremic syndrome or HUS, is more often associated with strains that produce Stx2 rather than Stx1 (Melton-Celsa 2014). 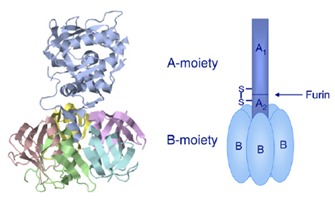