The phytotoxin Senecionine is one of over 660 known secondary metabolites of the pyrrolizidine alkaloid (PA) subclass. It is one of the major compounds found in plants of the genus Senecio (ragwort) belonging to the Asteraceae family. In total, PAs have been found in 350 different plant species but estimations suggest they may occur in about 6,000 species or 3% of all flowering plants worldwide.

Widespread plant species containing PAs are for example Senecio jacobaea (S. jacobea) and Senecio aquaticus (S. aquaticus), both native in Europe, or the invasive neophyte Senecio inaequidens (S. inaequidens) which is increasingly spreading from South Africa to European countries. All parts of the plants contain PAs and for example S. jacobea alone can contain up to 30 different PAs. Supposedly, plants produce PAs as defence compounds against herbivores and pathogens. 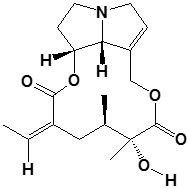 Pyrrolizidine alkaloids are structurally build up from a necin base esterified with up to two necic acids forming in total four major groups of PAs: 12-ring macrocyclic diesters such as Senecionine (CAS 130-01-8), 11-ring macrocyclic diesters, open-chain monoesters and open-chain diesters. In plants, PAs occur predominately in the better water-soluble N-oxide form but ratios of free base to respective N-oxides are highly variable and depend on the plant species.

Nearly 1/6 of all known PAs, including Senecionine, belong to the subgroup of 1,2-dehydropyrrolizidine alkaloids which are regarded as hepatotoxic and potential genotoxic carcinogens, as stated in a report by the European Food Safety Authority (EFSA) in 2011. Due to their toxicity, PAs are regarded as undesirable substances in food and feed and thus have recently been subject of several studies. A detailed analysis of 168 tea samples from six European countries revealed that 91% of investigated herbal teas contained one or more PAs, with a mean concentration of 6.13 µg/L tea infusion for the sum of 28 PAs.

The source and route of contamination of herbal teas are still largely unknown, but might occur due to unintentional co-harvest of PA-producing plants. Another contamination pathway was suggested by Nowak et al. who observed that PAs leached out from plant material of S. jacobea applied to soil and thus were available for root uptake by acceptor plants such as peppermint, chamomile, lemon balm and parsley. If PAs such as Senecionine can leach into soils, are fairly stable and mobile in the soil environment (predicted half-life 75 days, log Koc = 2.1), they pose a very interesting and important class of phytotoxins to be investigated as potential aquatic micropollutants.