Saxitoxins - produced by organisms from different taxonomic kingdoms - dinoflagellates and cyanobacteria - are the main causative agents of paralytic shellfish poisoning. 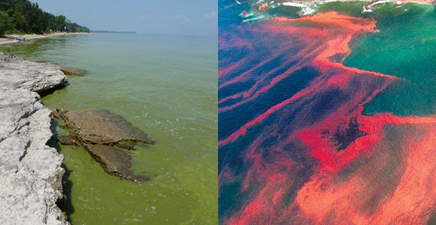 Saxitoxins represent an extraordinary class of potent neurotoxins as they can be produced by marine eukaryotic dinoflagellates (e.g. Alexandrium and Gymnodinium) as well as freshwater and marine prokaryotic cyanobacteria (e.g. Anabaena, Cylindrospermopsis, Lyngbya and Trichodesmium). 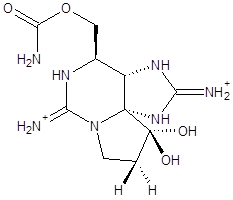 Saxitoxin is a representative analogue of a class of structurally related alkaloid neurotoxins that was the first to be identified, thus giving this class its name. The saxitoxin molecule (Fig. 2) can be substituted at various positions resulting in a range of analogues (currently 57 known variants), which can be grouped into carbamoyl, decarbamoyl, N-sulphocarbamoyl, gonyautoxins and deoxydecarbamoyl toxins.

Saxitoxins accumulate throughout the aquatic food web by e. g. clams, mussels, oysters, fish, crabs and snails. They also reach the terrestrial biota including humans who may suffer from paralytic shellfish poisoning after consumption of the contaminated seafood. These neurotoxins act by blocking Na+ channels in neuronal cells and Ca2+ and K+ channels in cardiac cells inhibiting electrical transmission of nervous impulses within nerves and muscles. Depending on the toxin involved, symptoms can be highly variable, ranging from slight tingling or numbness to complete respiratory paralysis and subsequent death.

Annually, about 2000 cases of human paralytic shellfish poisonings due to consumption of marine shellfish and fish with a mortality rate of approximately 15% are reported. With regard to freshwaters, human intoxication with saxitoxins has not been reported so far. However, they still are of relevance, especially as toxic blooms nowadays occur more frequently due to (anthropogenic) eutrophication of freshwater bodies intended for drinking and recreational purposes. Neither antidotes nor detoxification pathways are known yet and only few countries recommend maximum tolerable levels for drinking waters (up to 3 μg saxitoxin equivalents per L).