Pyrethrum – the natural role model for the synthetic pyrethroid insecticides

is the mixture of several monoterpene esters called pyrethrins that are produced by plants of the genus Tanacetum/Chrysanthemum (Asteraceae) as natural insecticide.

In the region of Dalmatia, where one of the main producing plants Tanacetum cinerariifolium (Dalmatian chrysanthemum) originates from, pyrethrum has been known for centuries for its insecticidal and insect repellant properties. For the industrial production of pyrethrum, Dalmatian chrysanthemum is nowadays mainly grown in Kenya and Tasmania. The pyrethrins are isolated from the dried flower heads that contain up to 1.2-1.8 % of the active compounds. Six different esters (pyrethrin I, pyrethrin II, cinerin I, cinerin II, jasmolin I and jasmolin II) make up the pyrethrum mixture in which pyrethrin I (CAS 121-21-1) is the main component.

Pyrethrins are applied broadly as nonspecific insecticides and are even registered for use in organic farming in many European countries. They mainly affect insects by irreversibly blocking Na+-channels in cells of the nervous system and thus leading to paralysis of the organism. As biodegradable and photolabile compounds, the esters are neither very persistent in the environment nor are they known to cause serious health effects in humans. Thus, they are considered to be among the safest pesticides for use in contact with food from the human health perspective.

However, the pyrethrins served as role model for the development of the synthetic pyrethroids such as permethrin and cypermethrin. These compounds have a similar structure and mode of action as the natural pyrethrins but are a lot more persistent and toxic. Developed during the time that DDT and lindane were prohibited, they served as common replacement and are nowadays found in 25% of all insecticidal products worldwide. Fields of application vary widely and are for example agriculture, horticulture, forestry, fishery, textile treatment, food processing and household insect repellent sprays. 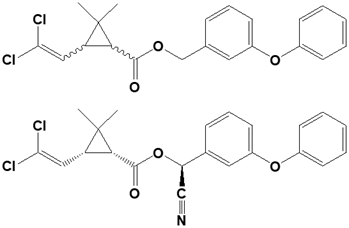 Due to their widespread use and environmental persistence the pyrethroid insecticides enrich in the environment. Particularly in soils and sediments they can be found in concentrations up to several hundred µg/kg. Either particle bound or in their free form, pyrethroids can also be found in water bodies. As strong nonspecific environmental poisons affecting all insects, also beneficial ones like bees, dragonflies and many other important members of aquatic food webs, representatives of the pyrethroids are on the list of priority compounds in the EU water framework directive. Cypermethrin concentrations of 0.45 ng/L found in Swiss surface waters for example, do already exceed the defined chronic environmental quality standards by a factor of five. Thus, the synthetic cousins of the natural pyrethrum insecticide pose a risk to overall surface water quality.