Terpene glycosides are found in a variety of plants. Ptaquiloside is one the most studied among this group due to its carcinogenic and clastogenic properties. Ptaquiloside is readily leached from fern stands and is a contaminant of ground water. 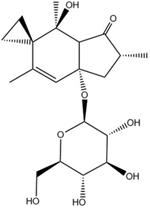 The carcinogen ptaquiloside (CAS 87625-62-5) is found in more than 20 ferns Worldwide, e.g. Bracken ferns (Pteridium sp.), Lip ferns (Cheilanthes sp.) and Brake ferns (Pteris sp.). The ferns are generally not cultivated except for ornamental purposes. However, wild Brackens are collected for consumption and export in vast quantities in Asia. Brackens are also consumed locally in North and South America, especially among First Nations. Brackens are used as traditional medicine in many parts of the World.

The role of ptaquiloside in the ferns is unknown – it does not seem to deter insects nor herbivores. However, it is well documented that Brackens due to their content of ptaquiloside and other similar terpene glycosides cause urinary bladder cancer among bovines, acute intoxication of calves and blindness among sheep. Brackens are the only plants that cause cancers in animals under natural conditions. As consequence, Brackens are classified by WHO/IARC as “...possibly carcinogenic to humans”.

Ptaquiloside is found in all parts of the ferns, including spores, roots and rhizomes. In Brackens, ptaquiloside make up to 5% of the dry matter content. The content is quite variable with the highest concentrations in the beginning of the growth season. Some clones do not have ptaquiloside. Ptaquiloside is highly polar (log Kow -0.6) and is readily leached from living or dead biomass by rain from where it can contaminate soil and water resources. Ptaquiloside is most stable in weak acid to neutral clayey subsoils, while ready degradation occurs in acid sandy topsoils and under alkaline conditions. Ptaquiloside contamination of streams, ponds and shallow groundwater is reported from Ireland, England and Denmark. The fate of ptaquiloside in surface and groundwaters has been studied intensively and reports are due to be published in 2017.