Patulin - can apple juice be dangerous?

is a secondary metabolite produced by several species of mold, especially within Aspergillus, Penicillium and Byssochlamys species. It is the most common mycotoxin found in apples and apple-derived products such as juice, cider, compotes and similar food.

Apples and apple-based products are among the most popular foods around the world for their delightful flavors and health benefits. The durability of a seasonal fruit, like apple, is largely affected by postharvest diseases. Approximately 25% and 50% of fruit product losses are caused by fungal pathogens during long term storage in developed countries and developing countries, respectively. In terms of apples, the most common postharvest pathogen is Penicillium expansum, which may jeopardize the profitability of apple producers and negatively affect human health because of the blue mold decay and the consequent production of the toxic metabolite, patulin.

Patulin was discovered during the screening effort to find new fungal molecules with antibiotic properties. It was first isolated by Birkinshaw et al in 1943 from Penicillium griseofulvum and Penicillium expansum. This mycotoxin was tested in clinical trials under the brand name “tercinin”. However, the interest in this potential antibiotic soon waned due its toxicity to humans and animals. Today, patulin contamination in apple products has been a worldwide problem without a satisfactory solution yet.

Like others mycotoxins, patulin is a polyketide metabolite. The biosynthetic pathway of patulin consists of approximetely 10 steps as suggested by several biochemical studies.  Recently, a cluster of 15 genes involved in patulin biosynthesis was reported, containing characterized enzymes, a regulation factor and transporter genes.

Exposure to this mycotoxin is associated with immunological, neurological and gastrointestinal outcomes. In rodents, the oral LD50 of patulin ranges between 29 and 55 mg/kg body weight. Poultry seem less sensitive, with an oral LD50 of 170 mg/kg body weight. If administered by the intravenous, intraperitoneal or subcutaneous routes, patulin becomes 3-6-times more toxic. Toxic signs consistently reported in all studies were agitation, in some cases convulsions, dyspnea, pulmonary congestion, edema, and ulceration, hyperemia and distension of the gastro intestinal tract. 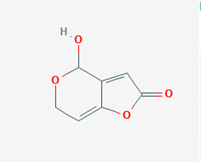 Figure 2. Chemical structure of patulin
Assessment of the health risks due to patulin consumption by humans has led many countries to regulate the quantity in food. Today, patulin belongs to a short list of mycotoxins whose level in food is regulated in many countries worldwide. Since 2003, European regulation 1425/3003 sets a maximum level of 50 µg/L for fruit juices and derived products, 25 µg/L for solid apple products and 10 µg/L for juices and foods destined for babies and young infants.