Cardenolides are steroids found in plant species all over the world. Many of them contain one or more glycone sugars and are recognized as toxic cardiac glycosides. Ouabain, a specific toxin from this group, has been studied for centuries due to its significant impact on heart disease. 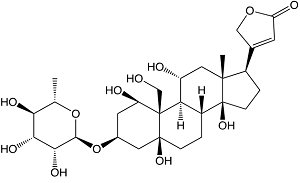 Ouabain (CAS 630-60-4), also known as g-strophanthin, is a plant-derived cardiac toxin and was traditionally used as an arrow poison by the Somalis. It can be found in different Acokanthera and Strophanthus species which are native to East Africa.

The molecular structure of ouabain consists of rhamnoside (a common glycone component of glycosides) and ouabagenin (a highly oxygenated steroid). Physiologically, it behaves as a typical Na+/K+-ATPase inhibitor, preventing Na+ efflux across cell membranes. The elevated intracellular Na+ reduces the activity of the Na+/Ca2+ exchanger (NCX), resulting in abnormal Ca2+ fluctuations which is associated with cardiac arrhythmias. Ouabain is a highly toxic compound (LD50 2.2 mg/kg, intravenously administration to mouse) and can cause symptoms such like vomiting and convulsion. Larger doses may lead to cardiac arrest and death.

Ouabain was first isolated and identified in 1882 by the French chemist, Léon-Albert Arnaud, as an amorphous substance from Acokanthera roots. It is also present in the wood, leaves and seeds of the plant, most commonly obtained from the seeds of Strophanthus gratus (~4%) or the twigs and roots of Acokanthera schimperi (~0.2%). Experimentally, ouabain can be extracted into alcohol (eg. MeOH, followed by partition between EtOAc/water), isolated via HPLC (eg. RP-C18 column, ACN/water gradient with 1% formic acid) and detected with ESI-MS. The pure compound is documented as an odourless white crystalline powder and is highly polar (log Kow -2.00). Despite its high toxicity, the environmental occcurence of ouabain as well as its interactions with the surrounding environment is barely reported, rendering it a promising candidate for further study.