The cardiac glycoside Oleandrin is named under a blossoming plant oleander which synthesizes this chemical as a secondary metabolite and has been known for its toxic effects for centuries.

Glycosidic natural toxins are very common secondary metabolites in plants as this structure is believed to prevent the host plant from self-poisoning and not compromise its effect on predators. While in the plant tissues, the glycosidic molecules contain a glycosidic bond to a fructose or glucose and express other chemical characteristics. The molecules are only hydrolysed and lose their glycose moiety when in contact with water, spitte or body fluids and the toxin is activated. 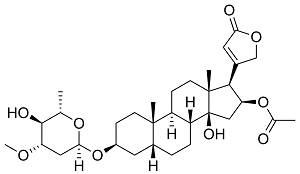 In addition of being a popular chemical structure in toxic plants, this structure makes the molecules polar, soluble and mobile in the soil. It poses a risk that the toxin can be transported to waters with little or no absorbance to the soils.

Cardiac glycosides are the glycosides that effect directly the Adenosine triphosphate of the cells and decrease the rate of contractions of the heart (Cardio). While certain threshold amounts are dangerous, the tiny concentrations of cardiac glycosides have their applications in clinically controlled treatment of heart diseases and other disorders.

Oleandrin is a powerful cardiac glycoside found in the leafs, fruits and the sap of the oleander plants. However, as it is the case of the most of the natural toxins, the highest concentration of Oleandrin can be found in the seeds of the plant. Ingestion of a few tiny seeds can be lethal.

The plant can be found in many parts of the world and the knowledge of its poisonous effects are largely widespread. From 1981 to 1985 a sharp increase of deliberate lethal poisoning by yellow oleander has been recorded in Sri Lanka. The local authorities had taken strict measures to eradicate this species and prohibit its cultivation as an ornamental plant. However, occasional accidental or deliberate poisonings still occur. Especially in the tropical and subtropical parts of the world.