Nodularins (NODs) are produced almost exclusively by filamentous diastrophic Nodularia spumigena. This cyanobacterium typically occurs in brackish waters and estuaries. NODs were firstly described in 1988, and since that time seven naturally occurring variants of NOD have been identified, being NOD-R the most abundant variant. The general structure of NODs: cyclo-(D-MeAsp-L-Arg-Adda-D-glutamate-Mdhb) in which L-Arg is L-arginine, D-MeAsp is D-erythro-β -methylaspartic acid, Mdhb is 2-(methylamino)-2- dehydrobutyric acid and the amino acid Adda is (2S,3S,8S,9S)-3-amino-9-methoxy-2,6,8-trimethyl-10-phenyldeca-4,6-dienoic acid. According to the structure, NODs are similar to microcystins (MCs), which are also relatively polar molecules, but Adda moiety provides partially hydrophobic characteristics. 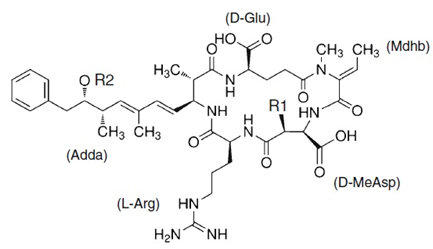 Similarly to MCs, NODs are toxic due to inhibition of the protein phosphatases (PPs), which leads to functional disturbance and structural liver disruption. Contrary to MCs, NOD cannot interact covalently with PPs due to the scarcity of methyldehydroalanine (Mdha) residue.

Human poisonings by N. spumigena ingestion were not yet reported. However, negative impact on the zooplankton and fish was observed. NOD was detected in different organs, being liver the main organ of accumulation.

Regarding occurrence, NODs have been found in Australia, New Zealand, Tasmania, Northern Europe and Baltic Sea. Nowadays, the majority of studies is focusing on Baltic Sea because this region provides a high amount of fish for human consumption. NODs are mainly found in the intracellular form. Concentrations of intracellular NODs increase with an elevation of temperature, phosphate concentrations and irradiance.