Nicotine has been used as a natural insecticide and is the archetype for the large range of synthetic neonicotinoid insecticides.

Nicotine is an alkaloid and natural insecticide that acts as an anti-herbivore chemical in tobacco plants (Nicotiana rustica (wild tabacco), Nicotiana tabacum (cultivated tabaco) Fig.1) and other nightshade plants. In tobacco plants nicotine may constitute up to 3 % of the dry weight. The compound mimics the endogenous neurotransmitter acetylcholine and exhibits agonistic effects on most nicotinic acetylcholine receptors. Nicotine has been used as a natural insecticide and is the archetype for the large range of synthetic neonicotinoid insecticides. 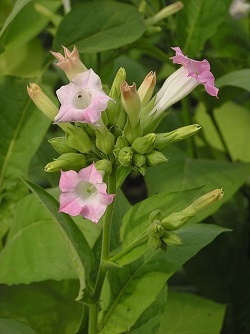 While tobacco plants have been consumed for ritual purposes by the Maya people in America at least since the 10th century, they were presented as dried tobacco to Christoph Columbus in 1492. Nicotine has been isolated for the first time by Karl Ludwig Reimann and Christian Wilhelm Posselt in 1928 and named after Jean Nicot, a French ambassador in Portugal in the 16th century. He sent tobacco seeds to his king, who supported the medicinal use of the new plant.

The chemical structure of nicotine contains two linked N-heterocyclic rings, a pyridine and a pyrrolidine (Fig 2). Nicotine is a hygroscopic, oily liquid, soluble in alcohols and ethers and miscible with water. Nicotine is readily volatile with a vapor pressure of 5.5 Pa at 25°C and dibasic with pka values of 3.2 and 7.9. Nicotine is optically active having two enantiomeric forms, while in nature only (S)-nicotine occurs. 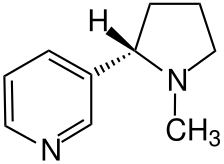 While nicotine is highly toxic to insects and crustaceans, for humans the compound acts as stimulant at low doses. Toxic effects may occur at an oral dose of few mg, while the lethal dose is in the range of 500 to 1000 mg (6.5 to 13 mg/kg)1. One cigarette contains about 12 mg of nicotine. In the human body, nicotine is metabolized particularly to cotinine and 3-hydroxycotinine, which are found in untreated wastewaters at concentrations of 1 to 10 µg/L and in treated wastewaters at 0.01 to 0.6 µg/L2. Parent nicotine concentrations up to 45 ng/L have been measured in River Guadalquivir, Spain3. A no-effect concentration (NOEC) of nicotine to Daphnia magna of 1 µg/L has been reported4.