Cyanobacteria, belonging to the world’s oldest eukaryotic inhabitants, produce many secondary metabolites. Besides pigments and nutrient-sequestering substances, some strains produce toxic compounds: cyanotoxins. Amongst these, microcystins are the most extensively studied due to their frequent occurrence and high toxicity. 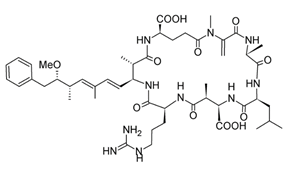 During cyanobacterial blooms (Fig. 1), a phenomenon occurring with increasing frequency and intensity due to anthropogenic eutrophication of surface water bodies and global warming, microcystins can be produced in large quantity with considerable impact on ecosystems, water-related tourism and drinking water quality.

Microcystins are produced by many widespread cyanobacterial genera (Fig. 1), which possess the necessary microcystin synthase genes, such as Microcystis, Planthothrix, Dolichospermum, Nodularia, or Oscillatoria.

The modular synthesis pathway of non-ribosomal peptide synthases can produce many structural variants of microcystins. More than 100 microcystin variants have been reported to date. Cyanobacterial strains generally produce around four microcystin congeners, mostly MC-LR, MC-RR and their desmethyl analogues, but production of up to 47 microcystin congeners per strain has been reported. Microcystin-LR (MC-LR, Fig. 2; PubChem CID: 445434) is the most studied microcystin among the different congeners, due to its ubiquity, abundance and toxicity. MC-LR-related toxic effects on liver were observed at nanomolar concentrations. Besides causing severe liver damage (hepatotoxin), microcystins may affect other organs including kidney, reproductive system, heart and lungs and may promote cancer, particularly after chronic low-dose exposures.