Lyngbyatoxin was investigated after some dermatitis cases, due by reports of “swimmer’s itch” which have been in direct contact with the cyanobacteria

Lyngbyatoxin is a secondary metabolite produced by the marine Moorea producens called also Lyngbya majuscula and Lyngbya wolley. These are cosmopolitan benthic cyanobacteria that start their growth on the marine sediments. They can be distinguished in the litoral zone as a surface or streamers mat as reported in Fig 1 and 2 (Speziale, 1991).

Lyngbyatoxin was investigated after some dermatitis cases, due by reports of “swimmer’s itch” which have been in direct contact with the cyanobacteria in Ohau (Hawaii). Moorea producens was considered the causative agent which exposure rapidly produced a skin irritation with burning sensation. 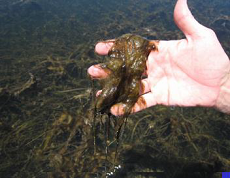 Therefore, other study demonstrated other chemical properties as a slight lipohilicity and high skin penetration potential. (Sanseverino et al.). In addition, L. majuscula and L. wolley not only can produce dermatotoxic alkaloids like lyngbyatoxin-a but also aplysiatoxin and debromoaplysiatoxin (Mynderse et al. 1977) and neurotoxic alkaloids like saxitoxins have been found as secondary metabolites (Carmichael et al.1977).

Lyngbyatoxin is an alkaloid with molecular formula of C27H39N3O2. It is structurally similar to the teleocidin A-1 while the teleocidin A-2 is the C19 epimer. Exist different variants of lyngbyatoxin like A, B, and C who differ in the position of the hydroxyl group. (Cardellina et al., 1979). Their structures were elucidated by Cardellina et al., which used a combination of IR spectroscopy and 1H and 13C nuclear magnetic resonance (NMR).

At the moment no analytical methods have been set for the determination of lyngbyatoxin but lots of identification and screening method are available. Screening tests, which are simpler and most practical for consideration by water utilities, include: enzyme-linked immunosorbent assays (ELISA) for which commercial kits are commercially available and which are the most ubiquitous (Carmichael 2001), and protein phosphatase inhibition (PPI) assays.