Jacobine - one of the reasons behind the toxicity of ragwort

Ragwort causes a great number of animal loses due to poisoning. The toxic effects of jacobine are due to the interference with several receptors that affects the muscular and nervous systems.

Jacobaea vulgaris, commonly known as ragwort or stinking willie, is a plant of the family Asteraceae. It is native to northern Eurasia, but it is widely distributed nowadays. It is considered a pest, as it spreads rapidly on roadsides, grasslands and forests clearings. Ragwort causes a great number of animal loses due to poisoning. In Senecio jacobea are found over thirty five pyrrolizidine alkaloids (PAs). The PAs are divided into four classes: senecionine, jacobine, erucifoline and otosenine-like PAs. Jacobine-like compounds are the most persistent and in highest amounts in the plant in certain chemotypes, representing up to 84% of the total content of PAs. The concentration of jacobine in the plant is up to 2.5 mg/g dry weight. 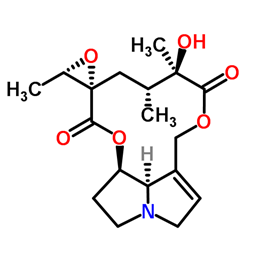 Jacobine, is a macrocyclic ester characterized by an epoxide functional group. This functional group may inhibit the biotransformation and further detoxification of PAs by esterases. The molecule is present in two forms: as a free base or a N-oxide form, where the free base is the more toxic. However, the N-oxide is ingested and metabolized by Cytochrome P450 to pyrro intermediates, which are unstable and toxic. The toxic effects are due to the interference with several receptors that affects the muscular and nervous systems.

A recent study found out that there is horizontal transfer of natural products between plant species. The PAs can be leached into the soil from living and decaying source plants. This studied suggested that the uptake of PAs by other plant species might be more common than expected. The PAs after being incorporated are translocated into the leaves. This might be the reason of the presence of jacobine and other PAs food products such as herbal teas or spices.