Toxic hypoglycin in ackee. Wait until it is ripe!

Ackee (Blighia sapida) is a member of soapberry family of Western Africa origin.

It was introduced to several countries such as Jamaica, the Caribbean countries of St. Vin­cent, Grenada, St. Lucia, Belize, and Haiti. The fruit (Figure 1) is the size of a small pear with a red to yellow inedible outer pod with black seeds and edible yellow part (aril) when ripened. As it becomes ripened, fruit opens into three parts (Figure 1b). Aril has a significant nutritive value due to the presence of fatty acids linoleic, stearic, and palmitic; vitamins A and C, folic acid, and niacin; and potassium, sodium, calcium, and zinc. Ackee is considered the national fruit of Jamaica, and it can be cooked with vegetables, fish, beef, pork and herbs [1-3].

However, ackee should not be eaten unripe as both unripe seeds and aril contain high levels of hypoglycin-A (Figure 2a). Seeds also contain less toxic hypoglycin-B (Figure 2b). Unripe fruit can have up to 100 times higher concentration of hypoglycin-A than that in the ripe ackee depending on the season [4]. As fruit gets ripe, amount of hypoglycin-A scales down promptly, however the seeds remain toxic [2, 3].

Hypoglycin-A is l-α-amino-β-2-methylene-cyclopropyl propionic acid (C7H11NO2) or L-(methylene-cyclopropyl)-alanine. Hypoglycin-B is ϒ-glutamyl hypoglycin (C12H18N2O5) [1]. Hypoglycin-A is a hepatotoxic. Poisoning by ackee is also known as ‘‘Jamaican vomiting sickness’’, which clinical features include nausea, severe vomiting leading to loss of consciousness and disturbed mental states. Consumption of large amounts of toxin may lead to coma or death within 12-24 hours [2, 3]. 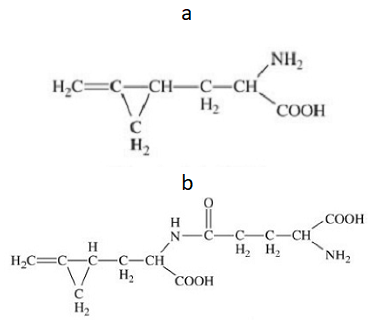 The actual causative agent of poisoning is a metabolite of hypoglycine-A - methylene cyclopropane acetyl CoA (MCPA-CoA). Hypoglycine-A is transmitted to methylene cyclopropyl alanine (MCPA) which follows oxidative decarboxylation to form MCPA-CoA. MAPA-CoA leads to depletion of glucose and finally hypoglycemia [5].