Grayanotoxin - From honey to hospital

Grayanotoxin is found in plants of the Ericaceae (heath) family including: Rhododendron spp.—azaleas and rhododendrons; Pieris spp.—Japanese pieris; Kalmia spp.—mountain laurels. It is a diterpene that is resistant to thermal degradation. 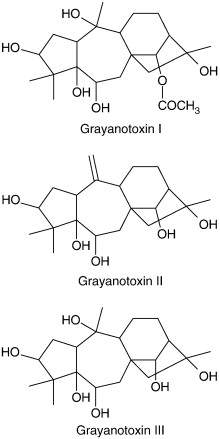 Grayanotoxin can be derived from the leaves, twigs or flowers of rhododendron, but also from secondary products such as honey. It is the latter that has brought attention to this particular natural toxin as there are many reported cases of poisoning due to ‘mad honey’ (Gunduz et al, 2008; Okuyan et al, 2010), particularly in Turkey. The effects are dose-dependent; in mild form, dizziness, weakness, excessive perspiration, hypersalivation, nausea, vomiting and paresthesias are present (Koca & Koca, 2007). However, severe intoxication may lead to life-threatening cardiac complications (Ergun et al., 2005). Consequently, hospitalisation from consuming mad honey (Deli Bal in Turkish) is not uncommon and clinicians are trying to raise awareness of its existence (Silici & Timucin, 2015), particularly as the dose required for intoxication are spoonfuls, rather than unrealistic amounts.

Rhododendron is found in many places across Europe and Asia. In the UK, it was attempts to look at ways to offset the cost of trying to control this highly invasive weed that quantified the presence, and persistence, of grayanotoxin in ‘common’ rhododendron (Rhododendron ponticum) in the dead wood, charcoal and composted wood (Wong et al., 2002). Hough et al (2010) further confirmed the occurrence of grayanotoxin in rhododendron compost, even after 1200 °C cumulative temperature.

The invasive nature of rhododendron and its presence in upland areas – areas typically synonymous with water catchments - coupled with the fact that grayantoxin has been reported as both highly water soluble and lipid soluble (Wong et al., 2002) means that there is a real potential for grayanotoxins to be transported in soil water to raw water sources. Indeed, unpublished work by the University of York and Fera has confirmed that grayanotoxins can leach through soil profiles. But, until further research is done, the question remains, “Do grayanotoxins pose a risk to drinking water?”