The cotton plant is cultivated in more than eighty countries over the world. In Europe, Greece and Spain are two main cotton production countries (~300 000 ha). Gossypol is a toxic polyphenolic compound found in the pigment glands throughout the plant, and may pose a risk associated with carcinogenicity and teratogenicity.

Gossypol (C30H30O8, CAS 303-45-7) is a natural polyphenolic aldehyde derived from the cotton plant (Gossypium sp.). It is a yellow pigment, mainly present in the cottonseed glands (0.4%-1.7% of the whole kernel) but is also found throughout the whole plant, including leaves, flowers and roots.

The compound has three tautomers in different solvents: aldehyde (A), ketol (B) and hemiacetal (C). Because of the restricted internaphthyl bond rotation, gossypol exists in form of two enantiomers: (+)-gossypol and (-)-gossypol. It contains six hydroxyl and two aldehyde groups, with a predicted LogP of 6.16. 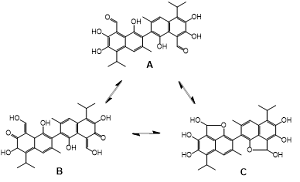 It has been known for a long time that gossypol, especially (-)-gossypol, may act as a male contraceptive and possess antifertility function. Besides, overwhelming intake of gossypol may lead to acute symptoms like respiratory distress, anorexia, heart failure and chronic diseases associated with carcinogenicity and teratogenicity. Compared to the extensive studies on the biological and physiological properties of gossypol and its derivatives, little investigations have been reported by far regarding to its environmental fate and risk, which makes it a promising “emerging contaminant” candidate.