Despite of their toxicity, 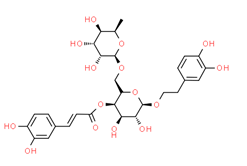 Forsythoside A (C29H36O15, CAS 79916-77-1) is a phenylethanoid glycoside with Log P of 2.12 (ACD/Labs). The compound is a bioactive secondary metabolite occurred in Forsythia suspense (Thunb.). Pure forsythoside A (98.19%) can be isolated from the plant using a one step high-speed counter-current chromatography (HSCCC) method, ethyl acetate-n-butanol-methanol-water (4:0.5:0.5:5, v/v) as extraction solvent. In addition to forsythoside A, forsythoside B-I as well as other phenethanol glycosides, e.g. suspensaside A and suspensaside B, were also identified as major bioactive components in this plant.

Forsythoside A has been shown to inhibit various influenza virus subtypes, including H1N1, oseltamivir-resistant H1N1, pandemic H1N1, H9N2/G1 and H3N2. It intervenes with virions exfoliation and release by suppressing the expression of M1, a multifunctional matrix protein crucial in the virus life cycle. The specific mechanism has yet to be fully understood.

The plant and its medicinal use

Forsythia suspensa (Thunb.) Vahl is a perennial deciduous shrub belonging to family Oleaceae. The plant is also called as weeping forsythia, golden-bell or Lianqiao. It is native in Asia but introduced to other continents as an ornamental plant and is hardy in Britain. It grows to around 3 m high as a free-standing shrub, with branches arching and straggling. Flowers are golden-yellow, blooming from March to April before the leaves appear. Leaves have toothed margins, usually undivided whereas occasionally arranged three-lobed arranged. Bitter fruits are capsule-like and appear from July to September.

All parts of Forsythia suspensa can be taken for medicinal usages. The dried fruit (Forsythiae Fructus) has been used by Chinese for over 4000 years as a treatment of acute upper respiratory tract complaints caused by viruses or bacterial infection. It is also one of the main effective ingredients in Lianhua-Qingwen Capsule, a traditional Chinese medicine (TCM) formulae containing 13 herbs in total. This TCM was developed in the aftermath of the 2002-2004 SARS outbreak and contributed in the fight against SARS-CoV and H1N1 virus in 2009. The TCM continues being used as a popular prevention and treatment of influenza in China till today for its broad-spectrum antiviral, antibacterial and anti-inflammatory activities. It is worth noting that latest research findings indicated Lianhua-Qingwen Capsule could be effective for the treatment of mild COVID-19 symptoms as well by inhibiting virus replication and repair cell injuries.

Pictures of the plant