Endotoxins - a structural link between cyanobacteria and human pathogens

Responsible for major complications in the treatment of bacterial infections, lipopolysaccharides (LPSs), also called endotoxins, scare clinical physicians worldwide. Endotoxins are produced by Gram-negative microbes, including cyanobacteria. Recently, more scientific interest is drawn to the effects of lipopolysaccharides, which are structural building blocks of these microorganisms.

Lipopolysaccharides (LPS), also known as endotoxins, are a major structural building block of the Gram-negative bacterial outer membrane (Figure 1). They contribute to a great extent to the microbes’s structural integrity and protect them from certain chemicals, hence help to survive harsh environmental conditions. Besides protecting (cyano-) bacteria from chemical stress, LPS is a strong trigger for the innate immune system of animals. 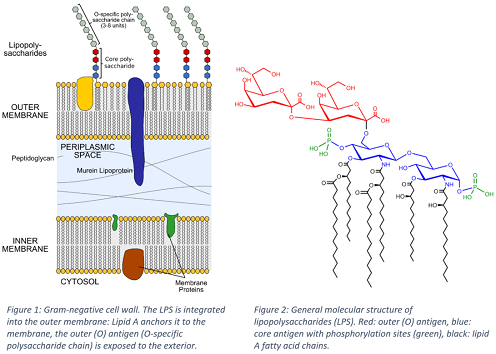 From the three domains, lipid A is responsible for much of the toxicity of Gram-negative bacteria. If cells are lysed and LPS is released to the blood, for example during infection and antibiotic treatment, the lipid A moiety may cause fever, diarrhoea or fatal septic shock by triggering many defensive mechanisms of the innate immune system at once.

Eventually, LPS is seldom considered the toxic agent itself. It rather modulates adverse effects of other cyanobacterial metabolites. For example, it may contribute to disrupt the gastrointestinal barrier upon ingestion and thereby facilitate the uptake of cyanobacterial toxins like microcystins, consequently increasing the pathological effect. Speaking of synergistic effects, it also needs to be mentioned that naturally occurring cyanobacterial blooms are very heterogeneous communities also comprised of heterotrophic bacteria. Hence, under environmental exposure conditions to biomass mixtures, bacterial LPS may play an important immunomodulatory role as well as cyanobacterial LPS. Concluding, there is rising concern about cyanobacterial LPS potentially contaminating resources of drinking water and the hazard has to be further investigated.