Cylindrospermopsins are cyanobacterial secondary metabolites capable of causing severe damage to the liver, kidney and other organs. 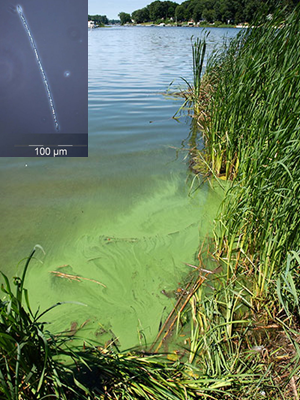 Cylindrospermopsins (CYNs) are a class of five chemical analogues: CYN (Fig. 2), 7-epi-CYN, 7-deoxy-CYN, 7-deoxydesulfo-CYN and 7-deoxydesulfo-12-acetyl-CYN. Cylindrospermopsin was first isolated from the cyanobacterium Cylindrospermopsis raciborskii which was found in a drinking water supply after an outbreak of hepatoenteritis in Palm Island in Northern Queensland, Australia in 1979. Since then, CYNs have been found across the globe in North, Central and South America, Asia, Australia, Africa and Europe and are produced by different cyanobacteria such as Aphanizomenon, Anabaena, Cylindrospermopsis, Lyngbya, Oscillatoria and Umezkia. CYN mainly occurs as an extracellular cyanotoxin excreted by producing cyanobacteria.

Cylindrospermopsin consist of a tricyclic guanidine group, a sulfate group and an uracil side chain, which provides the alkaloid with its biological active moiety. It is a potent protein synthesis inhibitor and can cause cell death, with its main target being the liver. However, it can also affect other organs and metabolic pathways, which makes it difficult to fully understand CYN’s toxicity.

Animals like mice exposed to CYN were suffering from progressive organ necrosis within few hours to days (i.p. 10.5 to 168 mg of freeze-dried C. raciborskii culture per kg body weight) and death after up to five days (i.p. 64 mg of freeze-dried C. raciborskii culture per kg body weight) due to renal and hepatic failure. CYN was also found to be a potential endocrine disrupting, carcinogenic and teratogenic agent which can accumulate in plants. Symptoms of human intoxication include anorexia, vomiting, headache, initial constipation and bloody diarrhea, dehydration, skin and eye irritation and others. A major human poisoning with CYN was first reported in 1979 in Palm Island, Australia, where more than 100 people had to be hospitalized due to hepatoenteritis after consuming CYN containing drinking water. Investigations of this dramatic incident found a toxic Cylindrospermopsis raciborskii bloom in the drinking water reservoir to be the cause.

Cylindrospermopsin is highly water soluble and relatively stable to a wide range of heat, light and pH conditions, contributing to its slow degradation in water. Additionally, it can permeate through membranes which makes it a cyanotoxin of concern in regard to water treatment.