In the 1950s in north-west USA sheep began giving birth to single-eye lambs. The handicapped lambs had seriously distorted faces and were subject to premature death.

It took the US Department of Agriculture a decade to puzzle out the reason, with one scientist even living in the farm for 3 summers. That reason appeared to be natural toxin. More exactly, a bioactive constituent of wild corn lilies: steroidal alkaloid with 6 connected rings. 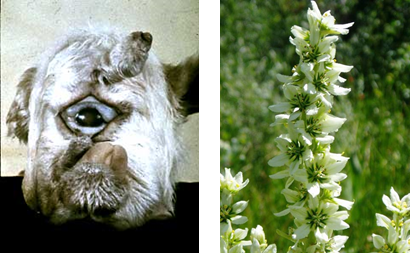 It did not take long for the compound to adopt a name cyclopamine, stemming from cyclopes – a giant one-eyed creatures in ancient Greek mythology. The scientists did not know how the compound caused the cyclopia, but told the farmers to cut the plant clear.

Though cyclopamine is toxic, it would not cause cyclopia for an animal after birth. It took 4 decades and advancement in the field of genetics to discover that the compound prevents embryonic brain from separating into two lobes which in turn causes the development of a single eye. By investigating binding powers of cyclopamine to certain proteins in non-pregnant cancer patients, scientists discovered closely related steroidal alkaloids that are recently approved as safe and effective against skin cancer.