When picking wild garlic (Allium ursinum), you better take care not to mistake the characteristically smelling green leaves with those of Convallaria majalis L., better known as lily of the valley. The latter contains up to 40 different cardenolide glycosides of which convallatoxin is the major toxin causing cardiac arrhythmia.

All parts of the plant contain the toxic cardenolide glycosides which are only formed in the above surface organs of the plant. Highest toxin concentrations are found in very young leaves, flowers and seeds (~0.45%) while ripe berries of lily of the valley hardly contain any toxins at all. 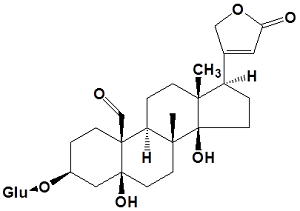 Formerly, Convallaria extracts have been used in therapeutic applications against dropsy with convallatoxin being one of the most active natural substances affecting the heart. Due to its side effects it is no longer allowed to administer these extracts as in the worst case intoxication due to wrong administration or also when individuals mistake Convallaria leaves for wild garlic possibly leads to heart failure (LD 0.07-0.08 mg/kg bodyweight, intravenous, cat). Other symptoms of convallatoxin poisoning are nausea, vomiting, severe headaches and a slowed, irregular heartbeat. However, it is not clear yet whether some of those symptoms are actually caused by the saponins found in the plants.

In 2011, lily of the valley became a prominent fatal plant used as a poison in the US show Breaking Bad. Nevertheless, convallatoxin and other cardenolide glycosides only show very small resorption rates in the body and therefore death is a very unlikely result of convallatoxin poisoning. According to predictions (EPISuite, US EPA), both the glycoside convallatoxin and aglycone strophanthidin persist for almost half a year in the environment and show high mobility with a log Koc of -0.64 and 0.16, respectively. Thus, it is possible that these toxins reach drinking water resources. Nonetheless, estimates of aquatic toxicity (ECOSAR, US EPA) show that in the long-term both glycoside and aglycone may only pose a risk to aquatic organisms, when exceeding concentrations in the low mg/L range. Due to the only locally occurring large stocks of lily of the valley, the rarity of the species in Europe and the generally low amount of toxins in the plant, Convallaria toxins will most likely not affect drinking water quality.