Cicuta virosa L, belonging to Umbelliferae, is well-known as toxic plant. It causes tonic and clonic convulsions and respiratory paralysis in humans as well as animals. Cicutoxin (C17H22O2), a C17–polyacetylene, is identified as the poisonous principle of Cicuta virosa L. It’s an unsaturated aliphatic alcohol bearing a long π-bond conjugate system, a terminal hydroxyl, and allylic hydroxyl, and a variety of its congeners (Figure 2) such as virol A (2) and virol C (3) have been isolated from the plant. Conjugated polyunsaturated diol in cicutoxin imparts to its unusual toxicity. Smaller end capping group and extended unsaturation conjugation in cicutoxin made it more labile than its congeners. 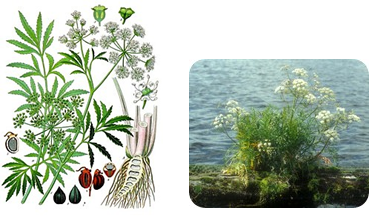 Acute toxicity of cicutoxin in rat, mice and snail were reported. In the central nervous system, cicutoxin act as noncompetitive gamma-aminobutyric acid (GABA) antagonists. It binds to beta domain of the GABA receptor, resulting in deactivation of the receptor.  Thus, it prevents the flow of chloride across the membrane by blocking chloride channel, this results in unabated neuronal depolarization that can lead to seizures. Studies also revealed that, cicutoxin inhibit the proliferation of lymphocyte by acting as a potent potassium channel blocker in activated T lymphocytes. 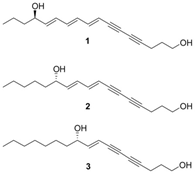 Figure 2: The structure of cicutoxin (1) and its congeners virol A (2) and C (3) from Cicuta virosa. Click image for 3D model of cicutoxin

Human poisoning can be caused by accidental ingestion of the plant part as well as through ingestion of meat especially from birds which eat the plant seeds during migratory flights. The symptom after ingestion includes vomiting, convulsions, widened pupils, salivation, excess sweating and the patient may go into coma. Moreover central nervous system depression, respiratory failure, acute rhabdomyolysis, acute renal failure and even death are among the symptoms. The death of a boy after ingestion of carrot-like plant containing cicutoxin was reported in 2001.

Even though cicutoxin is known by its strong poisoning effect, studies revealed that cicutoxin from Cicuta virosa showed a potent antileukemic activity. Likewise, due to its antitumor activity it can also be used as a drug against breast cancer.