Artemisinin is natural bioactive compound and it belongs to a class of sesquiterpene lactones, with an endoperoxide bridge (C-O-O-C).

It is produced and released by the plant Artemisia annua L. (sweet wormwood). For artemisinin production a. annua is cultivated today especially in China, Vietnam, India, Kenya, Tanzania and Eastern Europe. It produces on average between 0.01% and 0.4% artemisinin of plant dry weight. At the field scale, artemisinin yields vary from 1.5 to 10 kg/ha. The peak production of artemisinin is found during flowering, and it depends on various environmental factors such as genetics, UV-B and UV-C radiation, moderate drought, agricultural management and others such as nutrient deficiency.
Artemisinin and its derivative (artemisinin-combination therapies, ACTs) are now standard treatment worldwide against malaria and parasitic worm (helminth) infections. An unusual component of the artemisinin molecules is an endoperoxide 1,2,4-trioxane ring, this is the main antimalarial centre of the molecule. Artemisinin solid-powder is poorly soluble in oils and water. Therefore, during treatment it is mostly applied through the digestive tract, either by oral or rectal administration.
The major contribution of the loss of artemisinin to the soil origins from the dead leaves and also to a minor extent by wind/rain runoff (in soil, it was detected up to 15 m from cultivated A.annua plants, indicating that wind is a one the key determining the horizontal distribution) and roots. 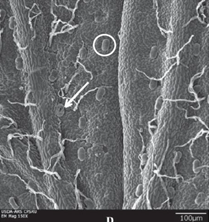 SEM pictures according to Jessing et al. (2013) of the adaxial side of a young Artemisia annua leave, with trichomes (white circle) and after a simulated rain event. The white arrow indicates a broken trichome.

Artemisinin can be considered to be a potential risk to non-target organisms, such as it inhibits growth of lettuce (Lactuva sativa) at relatively low concentrations (EC50, 2.5 mg kg-1). The EC50 for freshwater species such as algae (Pseudokirchneriella sp.) and duckweed (Lemna minor) were 0.24 mg L-1 and 0.19 mg L-1, respectively.

Experimentally distribution coefficient (Kd) values of artemisinin for sandy loam topsoil and subsoil with a lower SOM - were 6.57 L kg-1and 0.92 L kg-1, which confirms the hydrophobic properties. Due to the hydrophobic character diffusion of artemisnin is expected to be very limited in soils and as well volatilization can be excluded because of the low vapour pressure. In addition, artemisinin was found in two-meter deep drainage pipes during in a field study, a substantial amount of artemisinin was bypassing, the degrading upper soil matrix after an intensive rain event. Thus, artemisinin is mobile in soils and affects bacterial populations in ecosystem. 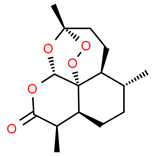