Aristolochic acids are a mixture of nitrophenanthrene carboxylic acids. They are produced by Aristolochia, a genus comprising over 500 species widespread all over the world. The compounds are nephrotoxic and carcinogenic, and are the causative factor for the Balkan endemic nephropathy. 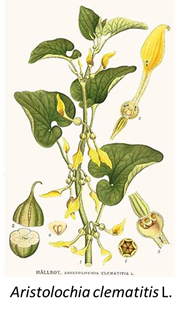 AAs are both nephrotoxic and carcinogenic. Chronic exposure to AA-containing plants, i.e. Aristolochia clematitis (birthwort) has been convinced to be the reason for Balkan endemic nephropathy (BEN), a familial progressive disease occurred in rural villages along Danube river. Involved countries include Serbia, Bulgaria, Romania, Bosnia and Herzegovina and Croatia. Moreover, AAs are also associated with Chinese herbs nephropathy (CHN), a disease outbreaking in Belgium in 1993 when women inadvertently ingested Aristolochia fangchi as a weight-loss supplement.

In a very recent published study of the agricultural fields in Serbia, AAs are proved to be persistent soil contaminants to where high BEN incidence has been observed. The compounds remain stable in soil for more than 9 months, with an initial drop of 40-50% in concentration during the first 3 months. Considering their high mobility, persistency and toxicity, it could be an interesting case-study for the network to investigate the possible impact of these natural toxins on the aquatic ecosystem.