There is a long history of toxicosis associated with the consumption of Fusarium-infected cereals by people and domestic animals.

Fusarium spp. is a fungal microorganism that occurs throughout the world in a variety of climates considered pathogen for both humans, animal, and plant which contaminates agricultural commodities, which is able to produce numerous secondary metabolites. Deoxynivalenol (DON) was largely reported and investigated since this toxin has been considered dangerous for gastrointestinal barrier integrity and teratogenic effects. To date, the toxicological characterization of several Fusarium secondary metabolites, such as equisetin, beauvericin, apicidin, moniliformin fusarin, and enniatins are poorly characterized1. 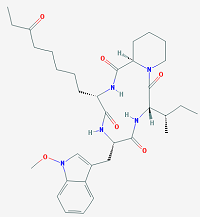 There is a long history of toxicosis associated with the consumption of Fusarium-infected cereals by people and domestic animals. Since many fungi can contaminate drinking water2 researcher have focused their interest also in secondary metabolites such as Apicidin.

Apicidins are a class of cyclic tetrapeptides are potent (nM) inhibitors of histone deacetylase and antiprotozoal agents. Histone deacetylase (HDAC) is inhibited with the consequent blocking of the activity of a nuclear isozyme that, in conjunction with histone acetylase (HAT), regulates gene transcription by controlling the dynamic process of acetylation and deacetylation of a lysine residue. Blockade of the process of deacetylation causes hyperacetylation of histones and gene activation that results in cells death3.

Apicidin congeners have been characterized by a previous extraction with methyl-ethyl ketone. Then the extract was purified in a silica gel column obtaining 4 fractions which were analyzed on reverse phase liquid chromatography. 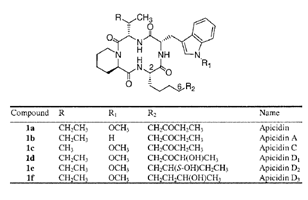 The low-resolution (LR)-electron impact mass spectrum of the toxin displayed a strong molecular ion at m/z 623 and fragment ions at m/z 593, 314, 283, 170, 130, and 84. The LR-chemical ionization mass spectrum had strong [M+1]+, [M+15]+, and [M+29]+ ion peaks at m/z 624, 638, and 652, respectively. The fast atom bombardment mass spectrum displayed a protonated molecular ion at m/z 624. High-resolution mass spectrometry and elemental analysis gave the molecular formula C34H49N5O6. The interpretation of the nuclear magnetic resonance data and amino oxidase experiments suggests that the toxin is identical to apicidin, which is cyclo-L-(2-amino-8-oxodecanoyl)–L-(N-methoxytryptophan)–L-isoleucyl–D-pipecolinyl4.

Human studies have not been carried out. Rats feeding with complete diet supplement spiked with 0.05% and 0.1% of apicidin brought to a loss of body weight, stomach illness, and death4. In addition, studies on angiogenesis were reported. Apicidin explained a strong inhibition on the formation of new vessels respect on the others treated with retinoic acid.

A more comprehensive risk assessment with a complete set of information has to be carried out since agricultural products are the most affected by Fusarium spp. In Addition, other species have been reported to produce apicidin such as F. semitectum and F. sambucinum.