Anatoxin-a(S) is a neurotoxic cyanobacterial secondary metabolite exerting a mode of action similar to organophosphorus and carbamate insecticides.

Anatoxin-a(S) is a unique cyanotoxin as it currently is the only naturally occurring organophosphate we know of. Despite its similar name, mode of action and producing cyanobacteria, it has a clearly distinguishable structure compared to another neurotoxic cyanotoxin anatoxin-a. It has been detected in Anabaena strains (now classified as a new genera Dolichospermum), and can co-occur with hepatotoxic microcystins. The neurotoxin has been identified in countries in Northern and Southern America, Europe and in the Arabian Peninsula. 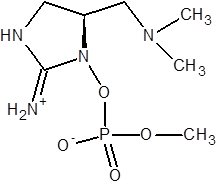 Intoxication with anatoxin-a(S) has been reported for birds, dogs, or swine with symptoms in mammals including hypersalivation, lacrimation, fasciculation, urinary incontinence, convulsions, death due to respiratory arrest. Toxicological examinations showed lethality in mice and rats with LD50 ranging 20 - 40 μg/kg within 30 min after i.p. injection. The cholinesterase inhibitive effect has also been shown in fish and crustaceans. Earlier studies suggested dosing of atropine in combination with activated charcoal or other cholinergic blockers for the treatment of anatoxin-a(S) related poisoning.

Anatoxin-a(S) has a polar character and thus is not expected to cross the blood-brain barrier. The alkaloid is fairly unstable, readily decomposing at temperatures > 40 ℃ and under alkaline conditions.