Many plants synthesize a various of compounds as a defence mechanism, these compounds can be toxic. These compounds are among secondary metabolites. Alkaloids are basic nitrogenous compounds in which the nitrogen is usually contained within a heterocyclic ring system. Many of them are known to be toxic to human and livestock, due to their potential to undergo metabolic activation.

Quinolizidine alkaloids (QAs) are secondary metabolites that occur mostly within family Fabaceae and they can occur in the genus Lupinus. Lupinus is a diverse genus, therefore only two species will be studied for toxin content, which are: narrow-leaved lupin (Lupinus angustifolius) and yellow lupin (Lupinus Luteus). Thus, a field experiment for both species will be conducted, in Taastrup – Danmark. During growing season, the QA contents in all parts of the plant and the fate of QAs in environment will be analysed.

Also, Pyrrolizidine alkaloids (PAs) are complex molecules, which two pyrrole rings linked. Each pyrrole can be diagrammed as five-sided structure with four carbons and one nitrogen forming the ring.  It is assumed that 3 % of flowering plants are able to form PAs and they are mainly found in the angiosperm families of Fabaceae (genus Crotalaria), Asteraceae (genus Senecioneae and Eupatorieae) and several genera of Boraginaceae.  These species are distributed throughout most of Europe and other parts world wide. Ragwort (Senecio jacobaea L.) in family of Asteraceae will be studied for toxin content along the growing season. 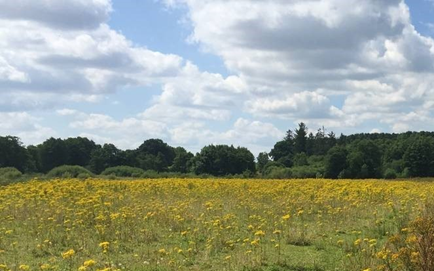 An analytical method of UPLC-QqQ is optimised for quantification of natural toxins, in particular above mentioned. In a pilot study, the alkaloids were analysed in plant, soil and water using the UPLC-QqQ method, in samples from selected locations in Denmark.

Also the fate (degradation, sorption and desorption) of QAs and PAs will be explained. Using different analytical tools, the mechanism of leaching and leached alkaloids in environment and the groundwater will be analysed.