The first PhD thesis in the NaToxAq network has been submitted. The thesis entitled Toxic secondary metabolites from plants: A new aspect of water quality is written by Vaidotas Kisielius. 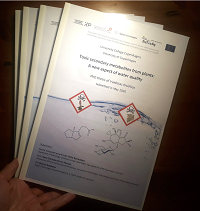 The thesis is based on four manuscripts, two of which have already been published or submitted to international peer-reviewed journals. The work includes a general overview of conventional water contaminants and plant secondary metabolites; the first report of presumably carcinogenic ptesculentoside and caudatoside in surface waters; report of carcinogenic and hepatotoxic pyrrolizidine alkaloids (PAs) in surface waters, and the first report of the PAs in seepage waters in groundwater wells. The research goals of the main parts of the project have been achieved by creating new analytical standards, and developing, validating and applying novel analytical LC-MS and LC-MS/MS methods for analysis of natural toxins in waters and plants.

It has been demonstrated that the average combined contents of ptesculentoside and caudatoside in Pteridium sp. are comparable to the average contents of carcinogenic ptaquiloside, and that the three compounds express nearly identical aquatic stability. It is argued that previous assessments of water toxicity adjacent to Pteridium sp. based on ptaquiloside were likely underestimated due to the absence of analysis of ptesculentoside and caudatoside, which are more water-soluble compounds released by the same plant. Additional study performed within the framework of this PhD project (not a part of the manuscripts) demonstrated that cattle grazing Adiantopsis containing caudatoside develop the same clinical symptoms like cattle grazing Pteridium containing ptaquiloside.

The discovery of the PAs in groundwater wells leaching from invasive Petasites sp. can be comparable to discovery of water contamination by anthropogenic Persistent Mobile Organic Compounds (PMOCs). The PMOCs have been detected in water only relatively recently due to the lack of available analytical techniques. Currently, only the methods with mass spectrometric detection provide the prerequisites needed to analyse the PAs in water at the reported concentrations. The reasons why the persistent plant toxins like PAs were not detected in water wells before might have been lack of knowledge about their presence, but also lack of sensitive analytical techniques. The PAs like many other alkaloids resemble the PMOCs by physicochemical properties (polarity, environmental persistence) and can express higher toxicity.

The author is massively grateful to all fellow NaToxAq students, consortium members and partners without whom the work couldn’t possibly have been done. The author is currently engaged in writing research proposals so that the most successful part of the project – the PAs – could be further investigated based on the knowledge disseminated and currently being created within the network.