Project: Screening for natural toxin fingerprints in waters from different regions all over Europe

Several researchers have been extensively investigating contamination of water resources such as lakes, rivers and ground water with toxins originated from anthropogenic, industrial and related activities. However, in the past decades, little or no concern has been given for toxins inventing naturally. Chemical compounds generated biologically by plant species, especially from those plant species growing along riverside (e.g crops and invasive plant species), may enter to water body causing risk on human health and aquatic system. For instance, plant species such as Ludwigia hexapentala (water promise), Elodea canadensis, Epilobium ciliatum growing alongside of river contain compounds, namely, flavonols or glycoflavones, polyphenols, alkaloids, tannins, which may end up in surface water causing contamination. Similarly, toxins originating from agricultural plant species (e.g. crops) leach through soil to river water thus, causing water pollution. 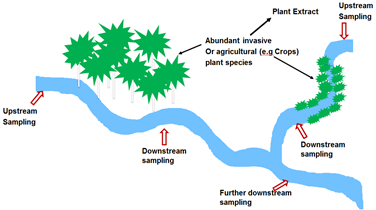 In this regard, this PhD project, as part of NaToxAq network, focuses on assessing natural toxin fingerprints in waters from European wide. The approaches are identification of natural toxin fingerprints from invasive or agricultural plant species growing alongside of river (here non-target/suspect screening) and target/suspect screening for natural toxins in waters from European wide. Natural toxins will be taken from existing databases and analysis of plant extracts, and prioritized based on their stability and potential ability to enter or leach to water body as well as the abundance of invasive or agricultural plant species. The existing data, previously analyzed for emerging contaminants by SOLUTION and NORMAN, will also be checked for the occurrence of those toxins in water samples.

The seasonal quantitative screening and assessment of target toxins as well as the link between the detection of natural toxins in water and the existence of invasive and agricultural plant species growing alongside of river will also be investigated.

Since September 2017, information regarding natural toxins of plant origin and occurrence of plant species in Europe along riverside as well as identifying the potential water sampling sites for natural toxin analysis were collected. Accordingly, sampling sites were selected based on their natural and agricultural vegetation distribution. LC-HRMS analyses were performed on the water samples collected from selected spots. Afterwards, data treatment and evaluation were carriedout and some potential hits were identified which need further confirmation steps. Similar result was obtained on suspect screening for natural toxin fingerprints in the existing data for water samples from SOLUTION project. In the upcoming phases of the work, further data evaluation will be done to confirm the identified potential hits. Water samples will also be recollected from the same spots for the analysis of seasonal variation in chemical fingerprints. Sampling from other European countries has also been planned.

In June we attended our last PhD school before NaToxAq final conference in Brno next year.

3rd NaToxAq PhD-school and Midterm Review by the European commission

Halfway into our NaToxAq-journey, we met again – this time in nice and sunny Barcelona.

For the week of the 9th to 15th of June, NaToxAq met up for the second summer school in Scarborough…

Looking back at my first year PhD trip

Mulatu Nanusha (ESR5) looks back at his first year as Marie Curie fellow.

Starting the journey towards a doctoral degree