ESR4 at the Helmholtz Centre for Environmental Research, Germany, has started the collection of invasive plants for identification of novel toxins that may pose a risk for drinking water resources. 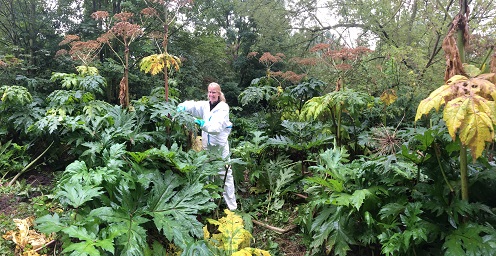 Most people have heard about it. Some have seen it. A few have touched it (not recommended!) and smelled it when it is standing tall.

The ERS4 Ph.D. project is focussed on the identification of novel toxins in invasive species and crops, spreading with climate change, and as a potential threat to drinking water resources. As ‘winter is coming’ one of the first tasks is the collection of plant material for analysis during winter. Therefore, already on the third day of the Ph.D. I found myself on the phone with a representative from the ‘Landesbetrieb für Hochwasserschutz und Wasserwirtschaft Sachsen-Anhalt (LHW)’ trying to explain in my still quite rusty German, that I would like to sample some plants and if he could help me with the localization. This lead to a field excursion on the 9th day of the Ph.D. (11.08.2017) to the Harz area. With the great help of a senior technician from the Helmholtz Centre for Environmental Research, several Giant Hogweeds were defeated and are now in the freezer waiting for further processing. The coming weeks are focused on identification, localization and sampling of additional relevant species, in addition to several seminars. The goal is to have at least 20 relevant species sampled, that could pose a risk to our drinking water resources if containing and releasing water-extractable toxins.