The Early Stage Researchers have started the field works, documenting relevant data and gathering relevant samples for their upcoming studies.

The primary purpose of the expeditions is to detect the dominating vegetation of concern in the regions widely surrounding the catchment areas of the major drinking water extraction wells. The sites wherein high biomass of the toxic plants will be determined will be further investigated with regards to their topography and surface water dynamics as well as geology and permeability of the predominating soils.

The ESRs are exploring the toxic invasive plant species and native high-biomass vegetation which generate chemicals that may impede water quality upon diffusing in it. The plant chemicals are reactive, degrading and hydrolysing as the result of many physiochemical and microbiological factors and may not necessarily enter the cycle of water that is eventually used for the purposes of the drinking water supplies. 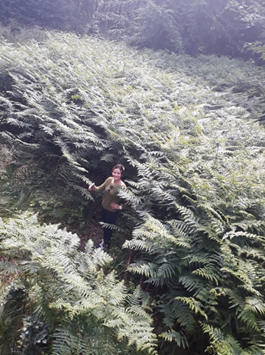 Bracken fern in the Island of Zealand (photo by Vaidotas Kisielius)

Ingestion of common high-biomass species of bracken fern (in the picture) might lead to severe illnesses1. Although the plants are normally not directly consumed, considerable concentrations of carcinogenic glycosidic norsesquiterpene Ptaquiloside, synthesized by the bracken fern, have been demonstrated in surface and ground waters2,3 as well as in shallow drinking water wells in the United Kingdom by previous studies4,5.

Invasive humidity-loving flowering plants petasites, synthesizing carcinogenic pyrrolizidine alkaloid Petasitenine in its high-biomass rhizomes and leaves, are clearly observed to infest the wet soils of the banks of the artificially made Danish melioration canals and wetter than usual environments surrounding the water extraction facilities.

Researchers are identifying the plants of concern and taking the biomass samples that will be used in laboratories for the purposes of developing more sensitive methods able to detect and effectively quantify the significantly lower concentrations of the concerned chemicals that may be leaching to waters and soils. Results of the findings are aimed to build up the research data for the NaToxAq mission the ultimate aim of which is to determine knowledge gaps in the field of the natural contamination and provide solutions for its control in the long run.