With nice summer approaching, the new sampling season starts again! On May 29th the three ESRs from Copenhagen University, Jawameer, Daniel and Xiaomeng, drove to Taastrup, a suburb 15 km west to the capital center, to check the status of lupin growth in an experimental farm of the university and get samples back for some further analysis. 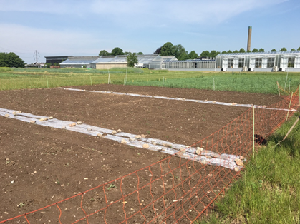 The experimental lupin field is 600 m2. It is divided into two sections, one for Lupinus luteus (“yellow lupin”) and one for Lupinus angustifolius (“blue lupin”). Oats are planted in between the the two sections as a natural “fence”. Jonas, a gardener who works for the Department, kindly offers his help taking care of the field and monitor the growth.  Two weeks after sowing, there are already a few first blades speared out of the earth. Later seven suction cups are planned to be installed to collect the leachate from the soil. 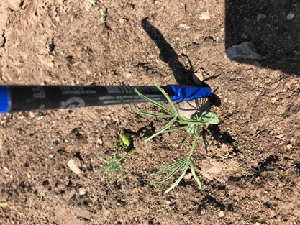 The field was designed as a preliminary case study for the lupins to be planted at Agroscope in Switzerland in 2019, by which time the ESRs are going to place their secondments there for target, nontarget analysis of lupin metabolites, and modeling the fate and leaching.

Photos are taken by Xiaomeng and Jawameer.